There's something for everyone on this beautiful island.

Chris Froome was probably miles away by now. Yet here I was, surrounded by the staff, vehicles and geared specifically on helping him win the Tour de France. I was stood in the golden glow of the Mediterranean sun and breathing deeply from the fresh sea air laden with hints of pine.

It was mid January of 2016 and Dave Brailsford was hosting a media day during the pre-season training camp for Team Ineos, then known as Team Sky. Perhaps as retribution for a season of prickly questions, perhaps as an insight into the difficulties of racing, perhaps to soften us up before we got stuck into a round of interviews, he tasked the press pack with riding a four-man team time trial…

Riding along the silky-smooth Spanish tarmac, soaking up the warm rays on the sweeping hairpin bends that we had all to ourselves.

The chosen course was the first four kilometres of the Coll de Femenia, a stone’s throw from the team’s annual training camp base in the seaside town of Port d’Alcudia.

It was not hard to see why Team Sky, along with countless other professional teams and elite athletes, choose Mallorca as their go-to winter training destination.

Even the late Nico Portal, who would guide Froome to his third Tour de France title from the wheel of the team car later that year but who was now having to coax three huffing and puffing journalists uphill, was smiling. At least none of us would be giving him sleepless nights over team selection.

Whoever you are – be you a newcomer making your first overseas cycling trip, an out-of-shape reporter, or a thoroughbred racing machine trying to win your third Tour de France – you’ll find your place on Mallorca. This modern island with a rugged soul has shed its reputation as the Med’s party capital and has now rightfully earned its distinction as the number one cycling destination in Europe. 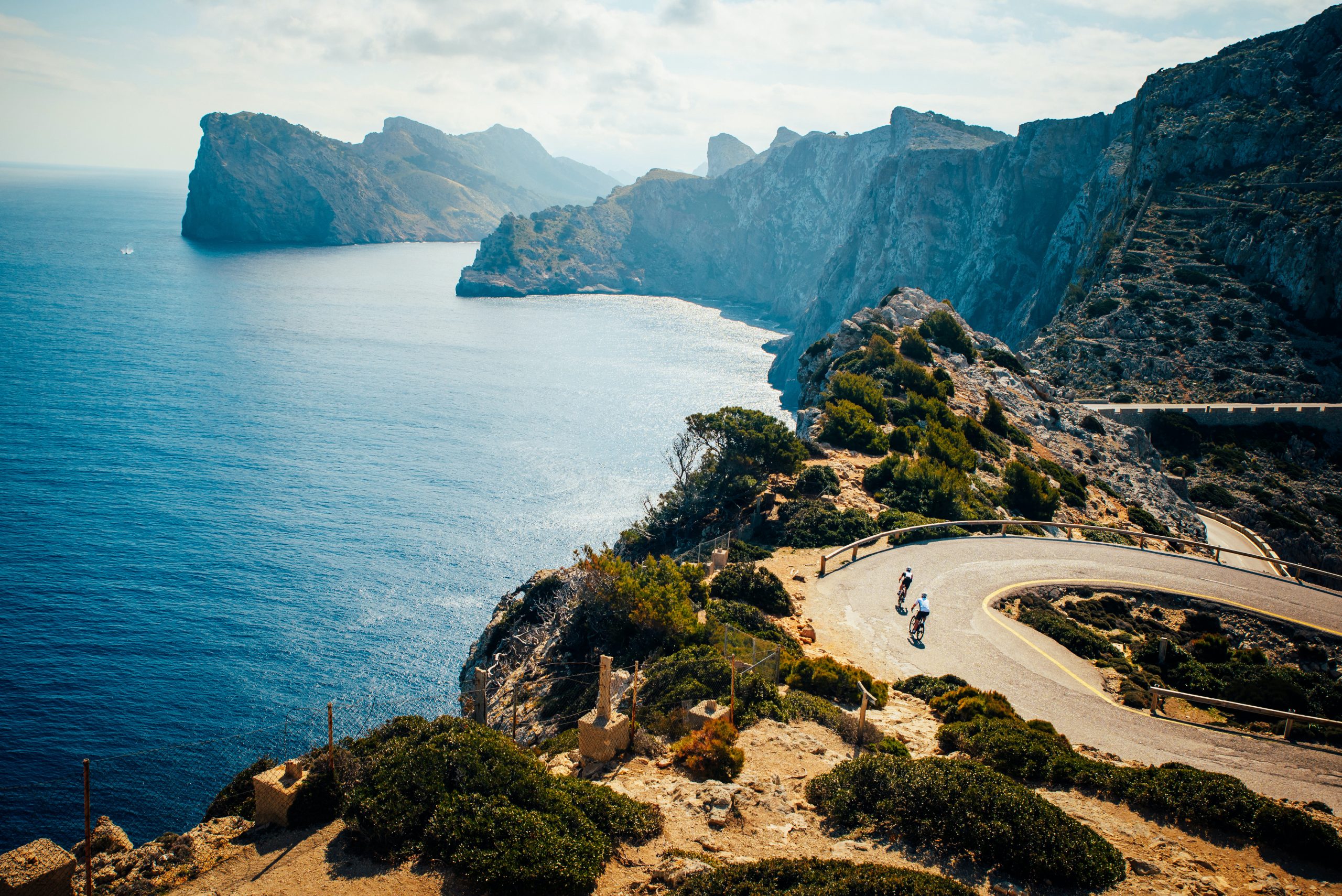 No more than 100 kilometres at its widest, the Mediterranean’s sea breezes temper the fiercest flares of the Spanish sun in the height of summer while its warm waters cocoon the island from the worst of the winter frost. August is the hottest month with a daily mean of 26 degrees Celsius; temperatures drop to around 12 degrees in winter.

The shoulder seasons of spring – from the almond blossom in late February through to May – and autumn – from mid September through to November – are particularly special times to visit. Come prepared for the odd shower, but don’t expect it to stick around for too long. 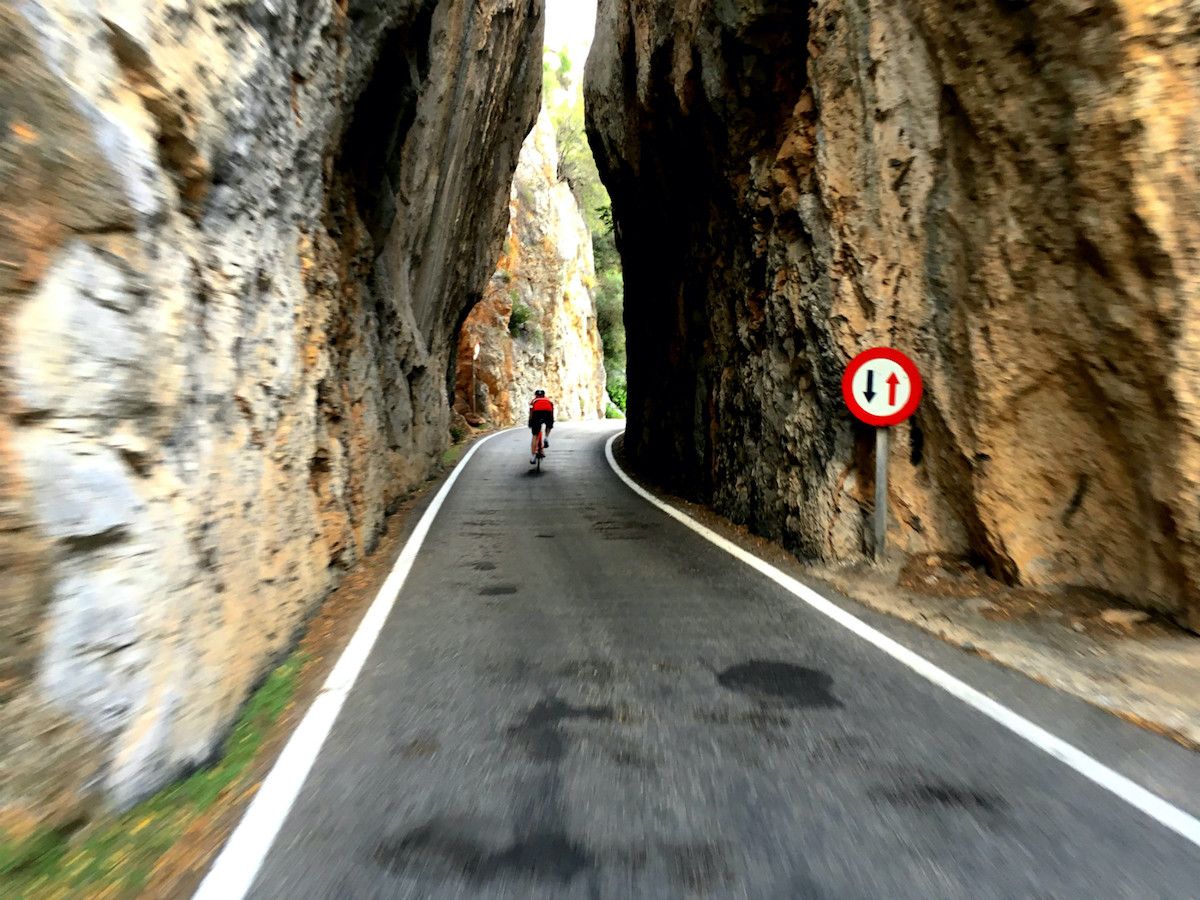 The best of Mallorca is epitomised by the climb of Sa Calobra, and it has to be seen to be believed. Constructed in the 1930s with tourism in mind, it plunges 680 metres down from the mountains to the fishing village that gives it its name, taking in vast sweeping views and a logic-defying 270-degree spiral bridge, essentially a hairpin bend that turns the wrong way. At 9.4km and with an average of 7 percent, it hits that Goldilocks sweet spot shared by Mallorca’s greatest roads; not too long nor too short, and not too steep nor too shallow.

It is undoubtedly the jewel in the crown of the Serra de Tramuntana, the labyrinthine mountain range along the northwest coast of the island. A UNESCO World Heritage area, it is renowned for its forests, scrubland and rugged pale crags etched with terraces of fruit groves before plunging into the sea. Regular visitors to the island will regale you with tales of the odd treacherously slick corner where an overhanging olive tree has dropped its oil laded fruit onto wet tarmac in the late winter.

It’s here that you will find the iconic climb of Puig Major and the bustling little town of Sóller, nestled in the ‘valley of gold’, so named for its prolific orange and lemon groves that burst into blossom in late April (the very name Sóller derives from the Arabic word for gold). You’ll also be riding along its northernmost limb on the classic ride out to Cap de Formentor – a contender for Mallorca’s finest road – along with countless other randonnées that would be worthy of a trip in their own right.

It’s not all about the mountains, however, and like a bento box of cycling, Mallorca offers a little bit of everything. The plains around Port d’Alcudia and Port de Pollença in the north of the island – where most riders tend to base themselves – offer mile after mile of gentle back roads. The centre of the island is home to more rolling terrain and you’ll find shorter, sharper hills on the more rugged and windswept eastern edge of the island.

Mallorca can lay claim to being one of the original ‘cycling destinations’ and its cycling culture has been woven into the island’s fabric for decades. Just go to Tolo’s Bar in Port de Pollença, a well-known hangout with a cycling-mad patron and a regular haunt for Bradley Wiggins in the town he called his home from home. These days you’re never far from a decent bike shop and high-end clothing brands Rapha and Pas Normal Studios have recently opened cafes and shops in the old town of Palma.

Professional teams have led by example and based themselves on the island for their pre-season training camps. In the past you had to be content with knowing your rides had been shared with the world’s best; now you can look on Strava to see exactly how you measure up with them. In late January the sequestered pros stretch their legs at the Challenge Mallorca, four back-to-back one-day races that provide a laid back hit out for them to see just how training is coming along for themselves and their rivals.

Yet Mallorca’s most famous cycling event is actually for amateurs, although it is arguably no easier for it. The Mallorca 312 takes thousands on a closed-road lap of the island. The course is (you guessed it) 312 kilometres long, comprising over 5000m of climbing. Echoing the legendary island laps that British yellow jersey wearer and all-round hard man Sean Yates used to do for fun, this bucket-list event now attracts an A-list cast of ex-pros (many of them owning homes on the island) as well as thousands of hardy amateurs. That said, the island’s fast, flowing roads make this eminently ‘do-able’ for any committed rider, plus there are options of 225km and 167km for anyone not up for the full 200 miles. 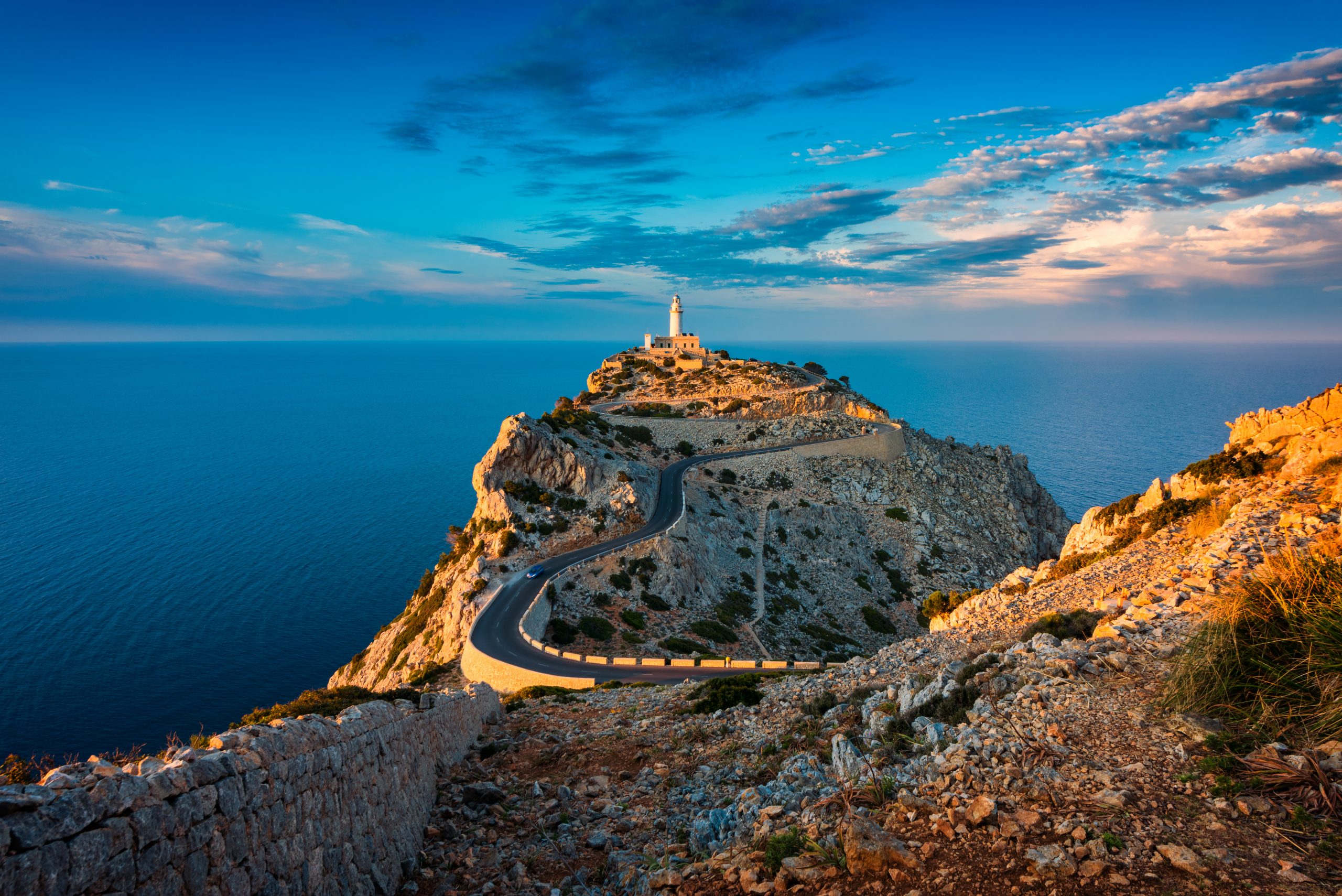 Mallorca has long been a melting pot of Mediterranean influences, ranging from Roman and Moorish to modern day Spanish and Catalan. It is with the latter that the island closely identifies; Catalan is an official language and the islanders identify with a simple life based on hard work, strong community and good food.

There’s nothing better after a long day’s ride than kicking back on the seafront with a glass of local wine and some pa amb oli – toasted bread rubbed with sweet fresh tomato and peppery olive oil – or enjoying a fidueà – paella with noodles – made with fresh seafood. Look out too for the ensaimada, a sweet, brioche-style bread dusted with sugar and the sobrasada cured sausage. It’s essentially peasant food, but the simplest things done well are often the best. 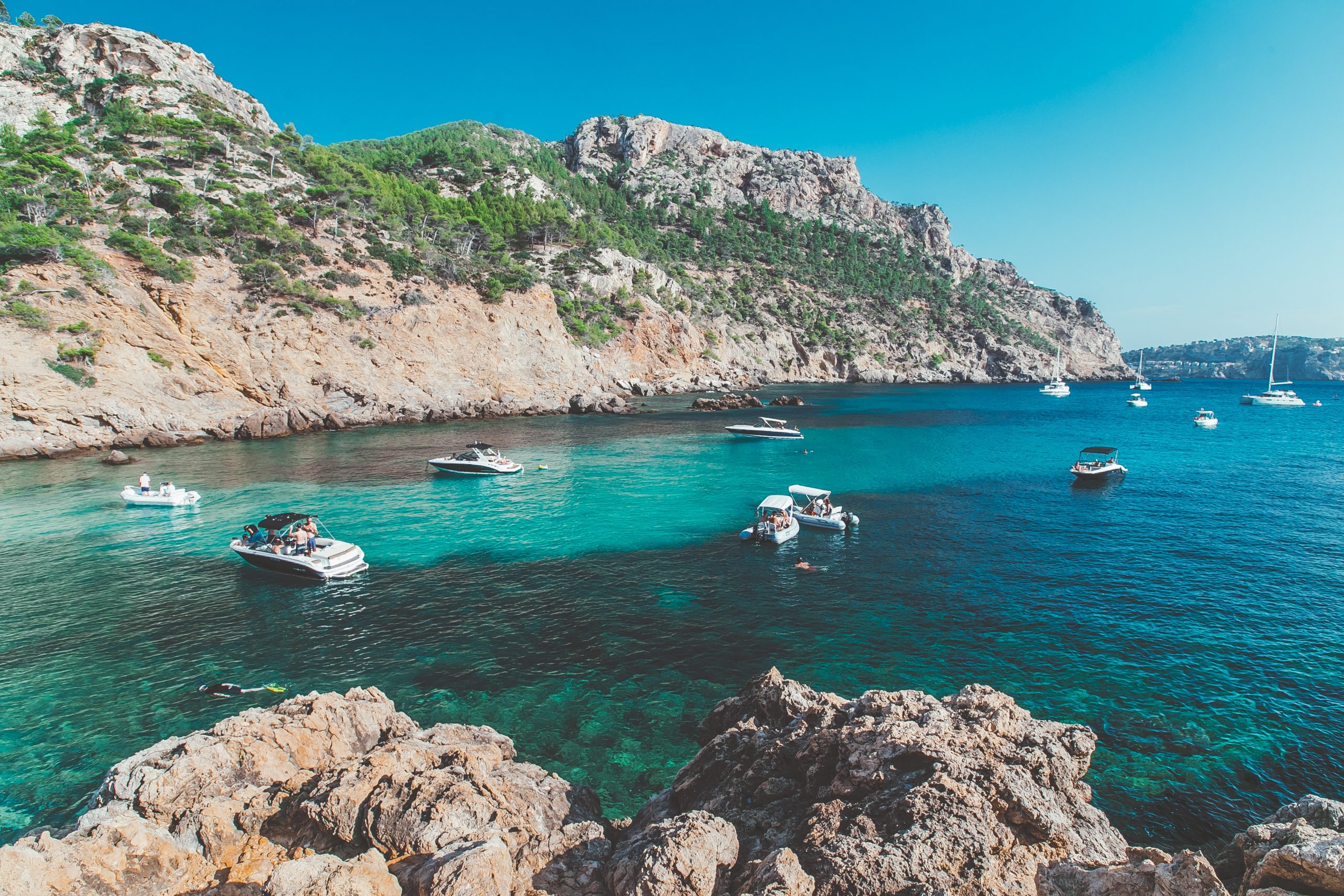 Mallorca is serviced by Palma de Mallorca Airport, with countless direct flight options across Europe. Alternately, the brave can travel from the mainland via a 6-7 hour ferry from Barcelona.

Even with mild temperatures in winter, the island is quiet this season from the throngs of beach tourists, so the winter months can be a great time to go, if you don’t mind the seasonal outposts being shut.

La Molienda: This friendly veggie cafe serves up a mean brekkie and brew.

Mise en Place: Don’t be fooled by its touristy location!

Dinner Spots in Palma de Mallorca Not To Miss

Casa Maruka: make sure to book in advance for this best of Mallorcan cuisine spot – a must visit for an authentic and honest culinary experience

Ombu: Get your tapas fix in at this street side location, bustling and busy, with a fresh take on traditional tapas.

Botanic: Eat in their namesake garden or quaint library, the healthy fare, with great wine pairings is a great option for the fit focused cyclist.

Mallorca is without a doubt the world's most treasured cycling paradise. Discover this varied landscape in a 9-day best of Mallorca cycling holiday navigating the island and rack up the miles covering the best Mallorca cycling routes. 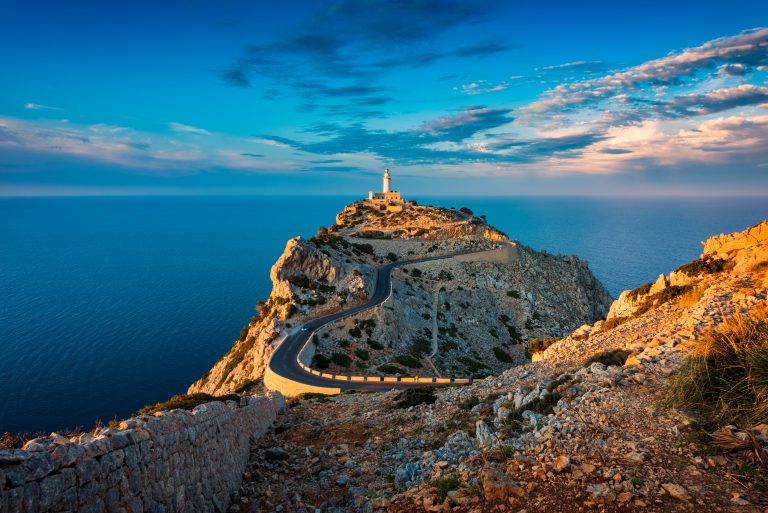